The answer is: Our 5 Dogs. But you’re a smart bunch and I know you already guessed that!

We are the proud owners of a Great Pyrenees, an American Staffordshire/Lab mix, a Teddy Bear mix, a Pomeranian and a Bolognese.

Yup. 5 Dogs. Come to think of it we have 5 chickens…what is with this 5 thing? Dunno. What I do know is having five dogs was not intentional. No. Intentional is telling yourself you’re just walking into Joann Fabric store to see what they have on sale. Like you’re fooling yourself. The intention is to buy the fabric. Bolts and bolts of fabric… ummm…not that I’ve done that or anything.

Ahem, where was I?

Oh. Dogs. Yes, all our dogs but one are rescues. Gunner our Pyrenees was purchased as an eight week old puppy from a working sheep farm in northern Ohio. 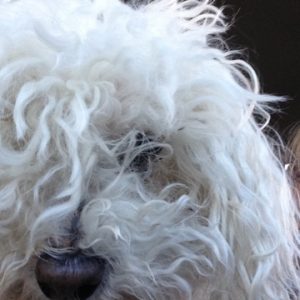 I’d be remiss if I didn’t backtrack and mention our first baby boy Harley. Harley Davidson Dawg to be exact. He was our first rescue. A Bolognese out of California, Harley came to us missing an eye and a tail. No one wanted to adopt him. No one except me. Mr. Bluejeans and I adored him. Sadly, he passed away three years ago. We still miss that little guy.

A couple years after we had Harley, we purchased Gunner the Great Pyrenees as a protection dog. You see, Mr. Bluejeans traveled much more in those days and he wanted a dog that was protective and imposing to be my buddy for those times he was gone. Let’s just say when Gunner stands on his back legs he’s almost as tall as Mr. Bluejeans who is an impressive 6′ tall. Plus Gunner weighs 155 pounds. Imposing indeed!

Then the dogs started rolling in. It was like the earth tilted and all things rescue dog fell into our hands. I didn’t go looking for them. Honest.

Jazmine came to us next all the way from Alaska. She is an American Staffordshire (aka Pit Bull)/Lab mix. She is all muscle and looks somewhat menacing if you don’t know her. BUT, when you do get to know her she’s a 75 pound lap dog. It’s like having Mr. Universe try to curl up in your lap. Not comfortable. This girl has cow eyes and knows how to use them. If you don’t know any better she’ll get you to stare into those sad sack eyes and Ba BAM you’re giving her your last piece of bacon. I say you because bacon and I aren’t easily parted. 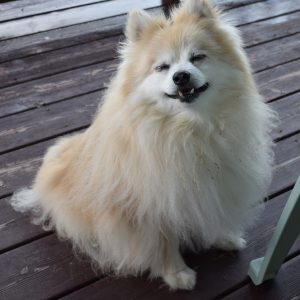 After Jazzi arrived Pierre the Pomeranian joined us. He is a Kentucky rescue dog. The poor boy was found wandering in the Daniel Boone National Forest! I still can’t believe my luck in having this little man in my life. Pierre is a complete Mamma’s boy. By choice. He’s my main man. I always wanted a Pomeranian and never thought I’d have one then Pierre magically appeared (while I was working at a shelter and magically brought him home). I’m totally smitten with my Pom Prince♥

Then Bijoux came into our lives as a California rescue. She is a Teddy Bear mix. Bijoux is bold. Bijoux is smart. Bijoux owns Mr. Bluejeans heart and knows it! I swear she is a person in a dog suit. For example (and there are lots of examples) we can tell her what room we are headed to and she will trot ahead of us to that room. Ya. Scary smart.

Four years after Bijoux joined our family, Harley passed. We took it hard and miss him to this day. Mr. Bluejeans and I decided that his passing was so hard on us that we weren’t going to adopt another dog. 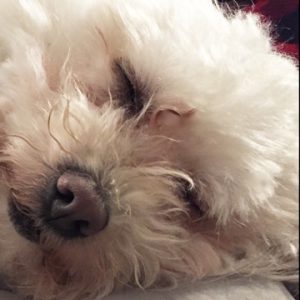 Somehow the following year my fingers found their way onto a computer keyboard and typed in “Bolognese Rescue”. Not many Bolognese out there. I knew it was a long shot but figured if it took a year or more that was fine. We were in no hurry. That was mid June. July 3rd I drove to the Milwaukee airport to pick up our new two year old baby boy Max! It was meant to be. Max is a Bolognese rescue out of an Arkansas puppy mill. The poor guy was caged as a stud for two years and never even ran or played on grass. He had no clue what that ticklish green stuff was. He does now!

So that’s our crew. These are the dogs of 5 Dog Farm. Mr. Bluejeans is QUITE aware that I’ve never promised to stick to just five dogs and now that we have our forever homestead…there’s room for more! Hmm, come to think of it there may be more room for fabric too. Win Win!

How did you get your pets?

Previous Post: « 5 Things I Do To Save Money and Help the Planet!
Next Post: He who holds the Key can Unlock my Heart »